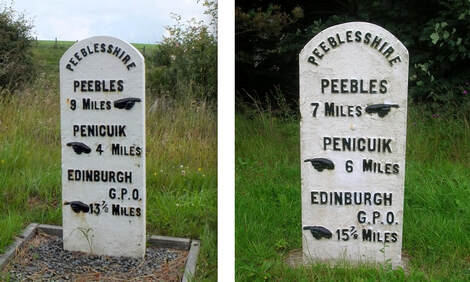 Request stop. Arriving by bus alight here to stroll along the Rights of Way to North Cloich Woodland.

The initial refusal of planning permission considered the potential for some hutters to choose to travel by private car. It is not possible to compel people to use public transport or e-bicycles, but the ethos of hutting respects and prioritises the natural environment, so car sharing, electrically powered cars and e-bikes, and bus/walk/cycle combinations of active travel are likely to be the preferred transport choices for some hutters. Huts are only of interest to people who live near enough to make sufficient use of them, so journeys are necessarily short. The transport sustainability of the hutting site was identified as a reason for this unhelpful refusal of planning approval.
The refusal decision was challenged because it appeared to ignore the easy accessibility of the nearby public transport corridor via two off-road cycling and walking routes.  Two public Rights of Way are available to hutters, providing convenient access between the hutting site and the bicycle-friendly public transport. These Rights of Way link the hutting site to X62 Galashiels-Peebles-Edinburgh request bus stops on the A703 main road.

A relevant quote from Scottish Borders Council’s published local transport strategy:
“The Council is committed to guiding development to locations that are accessible to existing or proposed public transport corridors and maximises opportunities for walking and cycling.”
https://www.scotborders.gov.uk/download/downloads/id/91/local_transport_strategy_2007-08.pdf   (Accessed 8 June 2020)
The proposed hutting site at North Cloich Woodland conforms with the published local transport strategy. 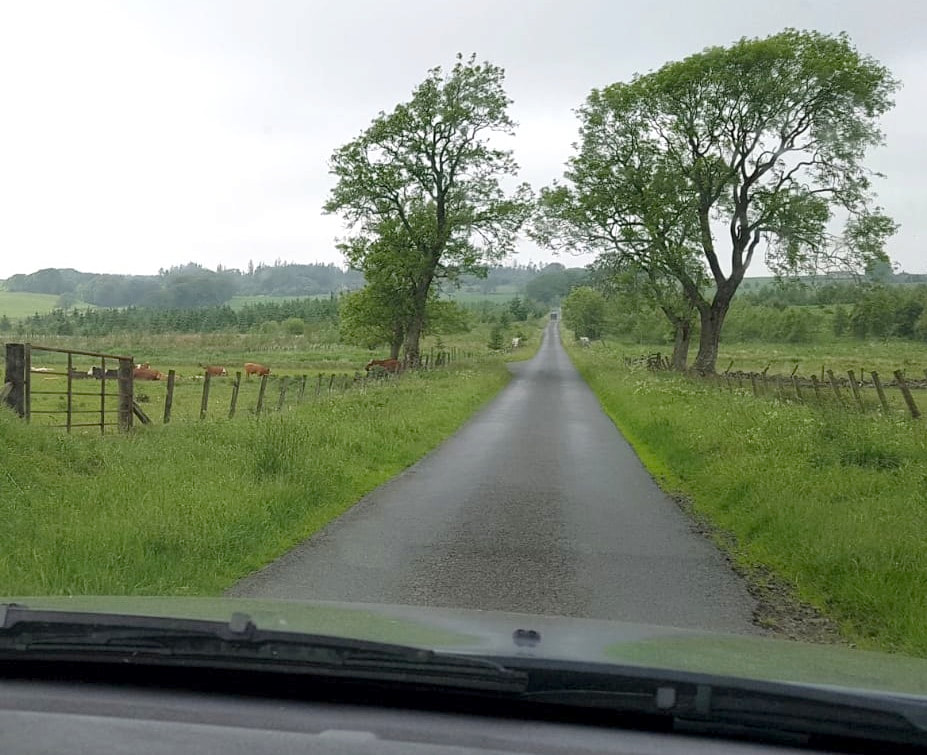 Driver's view showing long sight-lines and wide grass verges. This quiet minor road links North Cloich Woodland to two nearby public Rights of Way. Hutters will walk or cycle this short route to reach the frequent bike-friendly X62 bus service to and from Peebles, Penicuik or Edinburgh. The bridge parapets reveal the generous width of the road. 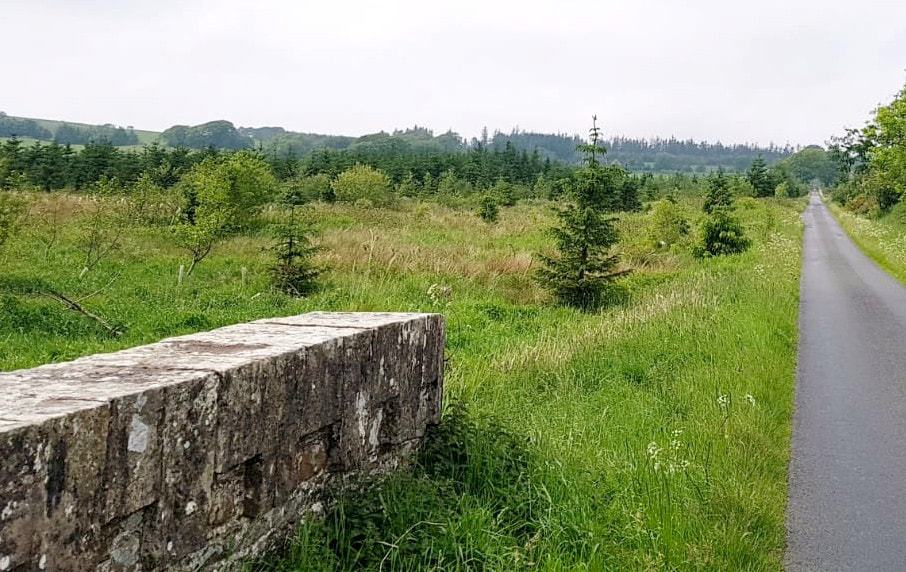 Hutters arriving on foot from either of the two nearby public Rights of Way can easily access the regenerating woodland. Cyclists may prefer to enter the woodland at the existing vehicle entrance.
Long straight rural roads between grazing fields as here at North Cloich were laid out by their original surveyors with efficiency in mind. Eighteenth and nineteenth century agricultural improvements included large enclosed fields defined by open-surfaced 'enclosure roads' built straight and wide for conveniently driving livestock. The full width of this straight road at North Cloich can be seen in the avenue of mature trees and soil embankments, still clearly visible beyond the road's grass verges. The road's construction date can be roughly estimated from North Cloich's avenue of ageing roadside trees. The roadway's smooth surface of bitumen macadam is a C20th improvement, laid along the centreline of the original wide straight road. This road's generous width is emphasised by its handsomely built bridge parapets. 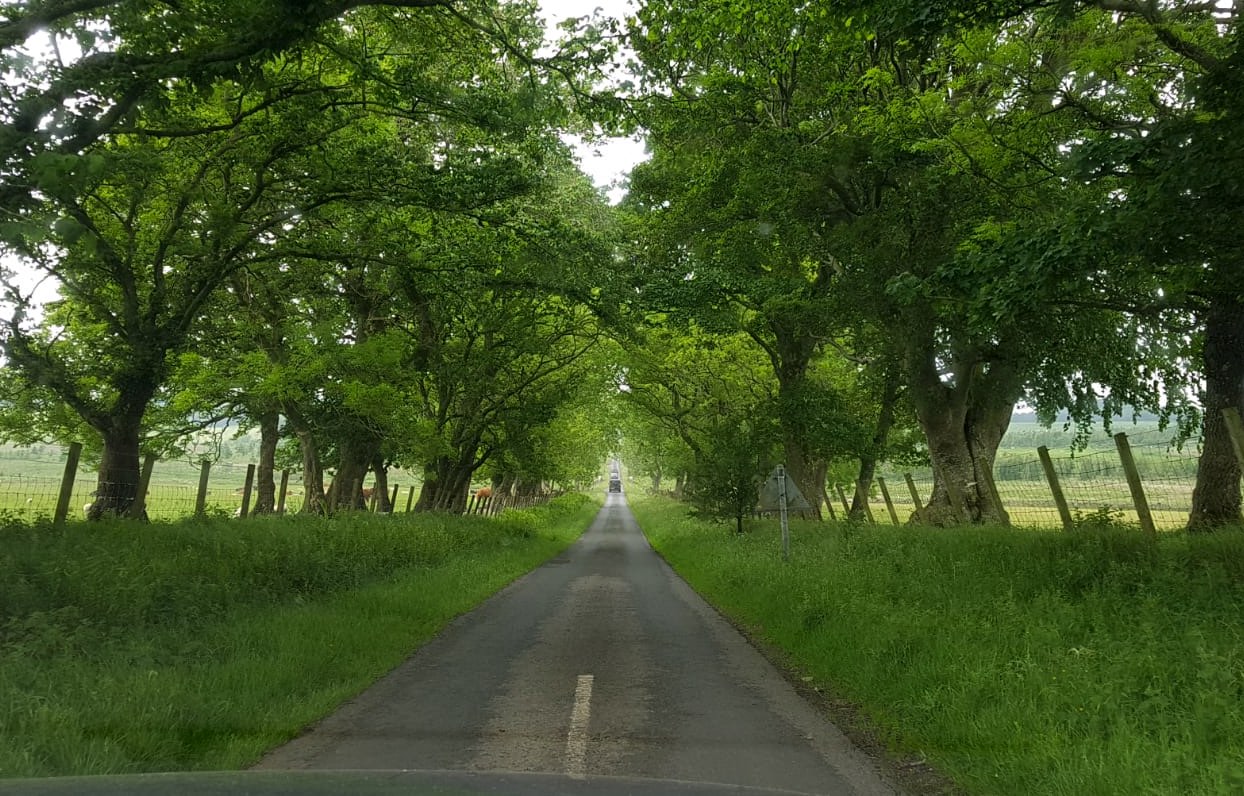 Agricultural fields and the rural roads between are primarily places of productive work. Under this straight avenue of mature trees near North Cloich Woodland pedestrians and vehicles can be safely seen from afar.